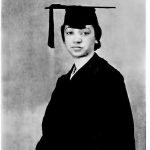 Often regarded as the first black female psychologist, Inez Beverly Prosser earned her doctorate from the University of Cincinnati in 1933.  Her dissertation, The Non-Academic Development of Negro Children in Mixed and Segregated Schools, was an important work in that it explored differences between African American students at integrated schools and segregated schools.  Her research looked at questions related to their occupational interests, participation in school activities, racial attitudes, and other important topics. She was one of the first psychologists to argue that racism had a damaging effect on the psychology of African American children.  This research was used in the debates surrounding Brown vs. Board of Education in 1954.  Prosser was killed in a car accident shortly after earning her degree.

Francis Cecil Sumner is known as the “Father of Black Psychology.” He was the first African American to receive a Ph.D. in psychology in 1920. Sumner worked closely with another well know psychologist, G. Stanley Hall, while at Clark University. Sumner was self-educated after elementary years, and he went on to college at age 15 and graduated as valedictorian of his class. Sumner studied in multiple disciplines throughout his educational career such as philosophy, English, modern languages, Greek, Latin, and psychology. Sumner was drafted during World War 1 and had to put his doctoral pursuit on hold. Following his discharge, Sumner completed his dissertation entitled “Psychoanalysis of Freud and Adler.”

Sumner’s main focus in psychology is “race psychology” wherein he studies how to understand and eliminate racial bias in the administration of justice. He wanted to combat the Eurocentric methods of psychology that were used during his time. Sumner critiqued the way the education system treated African Americans. His views aligned with Booker T. Washington and W.E.B. Dubois. Sumner believed that the department of psychology should separate from philosophy and the school of education within the university system. Throughout his time as a professor, Sumner constantly struggled to receive funding, and he believed that this struggle was due to racial discrimination. Aside from “race psychology,” Sumner also studied color and vision, as well as the psychology of religion. Sumner submitted a paper to the International Congress of Religious Psychology entitled “The Mental Hygiene of Religion.” He was one of the first people in academia to contribute to the fields of psychology, religion, and the administration of justice together. In Sumner’s later years he worked with the Journal of Social Psychology and the Psychological Bulletin. He wrote abstracts, primarily for studies written by French, German, Russian, Spanish, and English authors. Sumner was described by his students as being motivating and encouraging. 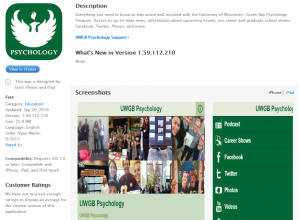 Download the free UWGB Psychology App, available through ITunes and Google Play. Use these links to go directly to it or search for “UWGB Psychology.”

See if you can find all the psychology references in this UW-Green Bay Psychology version of Pharrel Williams’ Happy.

Or watch the ‘Pop-up Video’ version for a key.

Sign up for a weekly psychology facts and alerts and updates on new exhibits!

One text per week at most. Discontinue at any time. 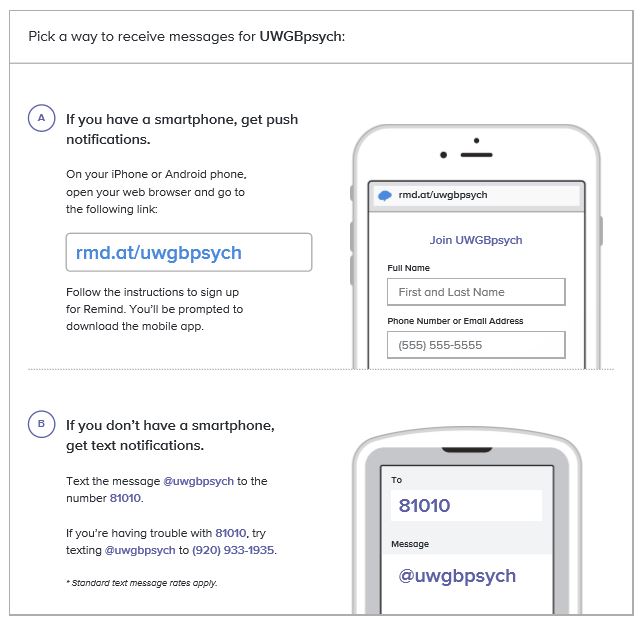 In 1961, researchers Albert Bandura, Dorothea Ross and Sheila A. Ross published an article in the Journal of Abnormal and Social Psychology titled: “Transmission of Aggression through Imitation of Aggressive Models”. This study helped many begin to understand one of the many aspects of aggression.

In this famous study, the researchers had 36 boys and 36 girls who were in the Stanford University Nursery. These children were between the ages of three to six years. In the experimental design, the children were placed into different groups. Below is a diagram of the groups:

After the children had watched the video of the adult’s behavior or not watched for the control group, each of the children were taken individually to a room with appealing toys. However, as soon as each child started to play, the experimenter would enter and say that they needed to use the toys for other children. This part of the experiment was meant to increase aggression in all groups.

Lastly, the children were taken to a similar room that they had witnessed the adult model’s in, depending on their group. The room had both non-aggressive and aggressive toys for the children to play with for 20 minutes, while being observed.

The children who had witnessed an aggressive adult model were significantly more imitative and aggressive that those children who were in the control group or did not witness an aggressive model. This study went on to help support Bandura’s Social Learning Theory, which explains that children learn through watching others, including their caregivers. To hear and see some of the results yourself, watch this video:

For more information or additional resources, check these out:

Sigmund Freud (1856-1939) was an Austrian neurologist and the founder of psychoanalysis. Although his findings and theories are very controversial, he is one of the most influence people in the field of psychology. His ideas have become interwoven into the fabric of our culture, with terms such as “Freudian slip”, “repression”, and “denial” appearing regularly in everyday language. His innovative treatments of human actions and dreams had massive implication for a wide variety of fields like psychology. He also helped push the study of the mind and greatly influenced the study and understanding of human psychological development.

Freud’s theories and techniques led largely to evaluating our interpretations of human behavior. His theory states that we all have three parts to our personality; the id, the ego, and the superego. The id consists of basic biological urges and instincts like hunger, thirst, and sexual impulses. It also operates in the unconscious level. The ego is put in place to balance the id’s and the superego’s needs. It seeks to please the id’s drive in realistic ways. The ego is found in the unconscious and conscious. Lastly, the superego operates in the conscious and subconscious of the mind. It is alert to the real world and makes sure the demands of the id are satisfied morally.

Freud’s Mechanism of Defense defense was thought of as psychological “weapons” that your ego uses to protect you from your self-created anxiety. It was used as a way to prevent your ids bad impulses from entering your consciousness. There are six different forms of defense mechanisms that Freud thought we used. The implications from this idea was that nearly everyone uses a way to help them cope at some point in their lives. It help reduce unhealthy physiological activity.

Although Freud’s work may be criticized today as non-scientific, there is no question that he had a huge impact on psychology. His ideas are now a part of public awareness, even though often we do not realize their origins are from his psychoanalytic tradition.